It’s easy for us to see nature change with the seasons, but it’s much harder to imagine the changes that take decades or centuries to develop. I wanted to see how Richmond’s new town forest has changed in the past century, so I put together old aerial photos and made an online map for everybody to access. Many of the patterns we see in the forest can be traced back to how the land was used in the past. By understanding the land’s history we can have a deeper relationship with it and make our time in the woods more meaningful.

When Richmond was founded in 1794 the land was covered by forests that had grown largely undisturbed by humans since the glaciers retreated 12,000 years ago. Those forests are long gone, cleared over the course of a century by the early settlers for their livestock and crops. By 1880 as much as 80% of Chittenden County was deforested, with virtually none of the original trees left standing. Since then the forest has made a slow comeback, but it could take centuries before the traces of human use fade.

The story of Richmond’s new town forest is still unfolding, and you can watch a rerun of the last 76 years by exploring the map linked above. When you click on the link and open the map you’ll see what Richmond’s town forest looked like in 1942. Click and drag on the center scroll bar and look at the changes from 1942 to 2013. Do you notice how the boundaries between forest and pasture change? In 1942 the lower half of the Andrews Farm was part of an extensive network of fields along the Winooski river valley, but by 2013 the pastureland is much smaller.

The 2013 photo was taken when the leaves were off the deciduous trees, which makes the evergreen trees stand out in stark contrast. As it turns out the evergreens are different species if the land was pasture in 1942 or forest. On abandoned pastures, you can count on almost every evergreen to be a white pine, while evergreens in areas that were forested in 1942 are now mostly hemlocks. The reason for this is hemlock seeds need cool shady conditions to germinate, whereas white pines need a lot of sun.

Hemlock and pine stands have entirely different feels to them. The white pine stands are open and sunny, with lots of brambles and saplings in the understory. Their trunks are straight and tall because all of the trees are the same age and have been racing upwards together towards the light. The hemlock stands on the other hand are dark, and the understory is open. The trees here feel ancient, and their trunks are stout from many slow years of growing in the shade. Because their canopy is so dense, hemlock stands provide perfect shelter for deer in the winter.

Take a look around the map and see if you notice any other patterns in the woods. Ask yourself if what you are seeing is a product of human actions like logging or a natural phenomena like a windstorm. How long will these patterns and their effects last? It’s hard to say, but we know from this map that the old pasture lands are still starkly different from the old forests, even after 76 years of abandonment. It makes me wonder what the woods will look like in another 76 years. I guess it largely depends on what we do with them. 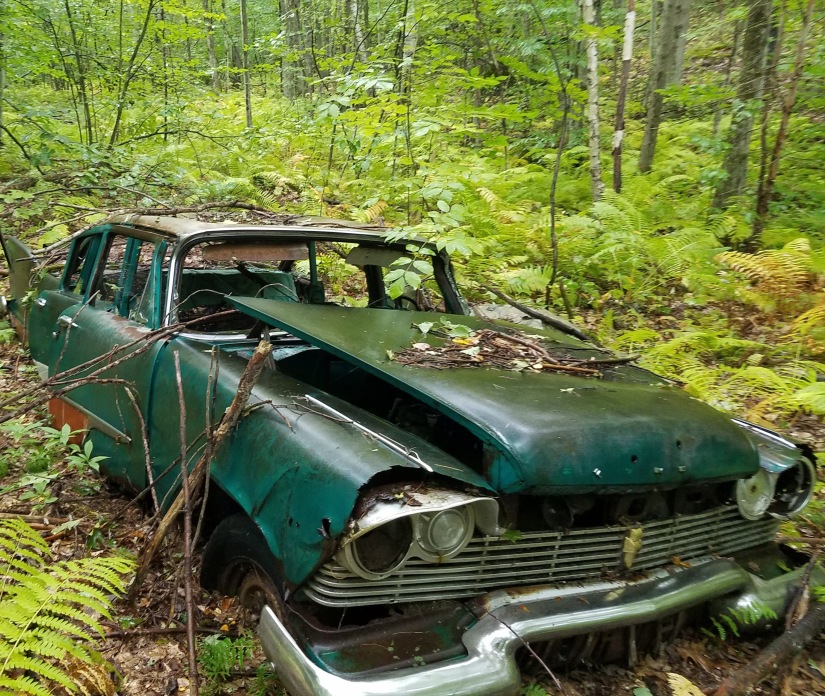