I was never allowed to go barefoot as a child. If I did, my mother claimed, tiny parasitic “hookworms,” invisible to the naked eye, would wriggle through the skin between my toes. Once inside, the worms would meander through my blood vessels to my lungs, then up into my trachea, causing me to choke and swallow the worms. Tucked away in the cozy nooks and folds in my intestinal walls, the worms would suck my blood and use this stolen energy to, well, hook up, with females spawning up to thirty thousand eggs per day. The excreted eggs would eventually return to the soil to infect any hapless barefoot children who might wander by, repeating the cycle ad nauseam.

For years, I wondered if my mother had manufactured the hookworms as a cautionary fable to keep her unruly child in line – or at least acceptably shod – when venturing outdoors. I saw the hookworms as sort of a helminthic cryptid, part of the accepted canon of made-up beings (like Santa Claus and the Tooth Fairy) about which adults lie to children as a matter of course. Her description of their life cycle read like the plot of a horror movie – oddly specific, yet too farfetched to be real.

Only as an adult did I learn the truth: hookworms are real and their presence in the soil ripple through all the layers of the landscape, a hidden yet inescapable presence in the ecology and culture of the American South. Hookworms are the missing piece of history and ecology, the keystone that allows so many other seemingly unrelated facts to fall into place and let the big picture snap into focus. 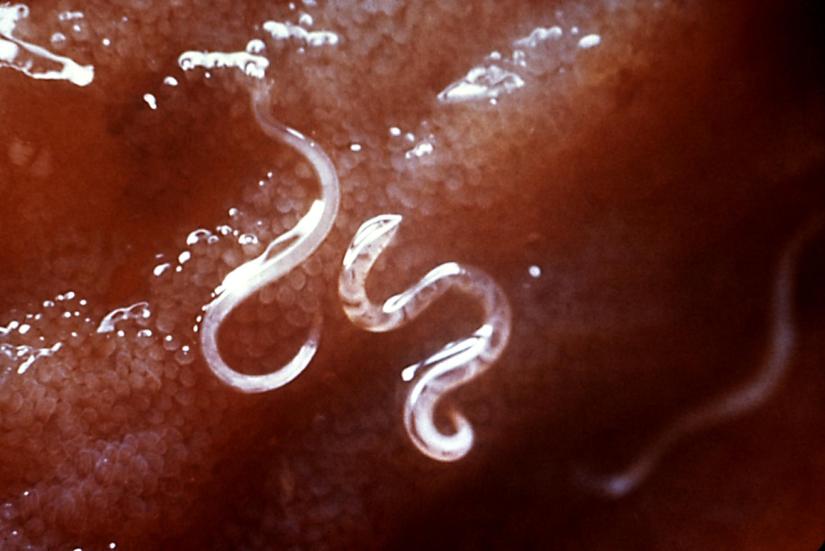 Infection by Necator americanus isn’t fun. Imagine a million tiny vampires happily burrowed into your gut, day after day after day after day. The more worms, the nastier the effects: fatigue, weight loss, headaches, anemia, stomachaches, a slow death by a thousand cuts that can literally kill young children or older adults already weakened by poverty or ill health. But for most victims, hookworms are a life sentence, a subtle, insidious handicap they don’t even know they’re carrying.

It’s hard to do anything when hordes of hookworms are feasting in your gut – hence the myth and stereotype of the “lazy southener.” Hookworm infections kept down agricultural productivity in the region, slowed economic growth, and exacerbated the turmoil of food shortages and disturbances. Look at black-and-white photographs of wan, twisted faces from the Civil War and onward, and you are likely seeing the effects of chronic hookworm infection, too.

To make matters worse, poor sanitation and inadequate footwear – the two major factors that contribute to infection – are also hallmarks of the poorest echelons of society. This correlation, combined with widespread prejudice, meant that sufferers’ symptoms were blamed on their race, class, creed, culture or fundamental failings as human beings – never as the legitimate disease that it truly was. And it’s even harder to bootstrap your way out of poverty if you’re weakened by continuous hookworm infections – thus setting up a nasty feedback loop that would trap millions in an endless cycle of pain. It wasn’t until the early twentieth century that the Rockefeller Sanitation Commission for the Eradication of Hookworm Disease brought the issue to mainstream attention in a massive public health campaign and the South began to catch up with other regions of the country that weren’t prone to widespread parasite infections.

Fortunately, hookworms are far from invicible. They flourish best in warm, wet rainy landscapes like the American South, but they find it difficult to get a foothold in regions where the ground freezes regularly. Deserts, too, are inhospitable to them. And, once a victim is diagnosed, there are specialized drugs that will easily purge the worms from their body, though they do nothing to prevent subsequent re-infection later on.

For those living in prime hookworm country, avoidance is the best strategy, through the twin paradigms of sanitation and shoes. Even in wealthy countries like the United States, it isn’t possible to avoid infection if adequate sewage treatment is unavailable or unreliable. A recent study by the American Journal of Tropical Medicine and Hygiene found that thirty-four percent of surveyed households in a rural Alabama county tested positive for hookworms (https://doi.org/10.4269/ajtmh.17-0396). That’s a staggering finding for a country where the disease was supposed to have been eliminated decades ago, and where knowledge of the creatures’ existence has faded from public memory, until they reached, as they did for me, quasi-mythological status.

Despite my skepticism as a child, my mother was right all along. When walking in hookworm country, better watch your step – you never know what you might be bringing home with you. And if you’re always feeling under the weather – maybe it was something you ate. Or maybe this time, something’s eating you.